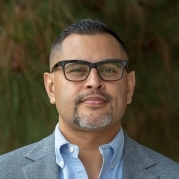 Efrén Pérez is Full Professor of Political Science and Psychology (by courtesy). His scholarship centers on political psychology, with specific interests in racial and ethnic politics, language and political thinking, implicit political cognition, and the measurement of political concepts.

His book, Unspoken Politics: Implicit Attitudes and Political Thinking  (Cambridge University Press), received two prestigious awards from the American Political Science Association. He is also the author of numerous articles in leading political science journals, such as the American Journal of Political Science, The Journal of Politics, and Political Behavior. Beyond his research, Efrén directs the Race, Ethnicity, Politics, and Society experimental lab (REPS Lab), and the Center for American Politics and Public Policy (CAPPP). He is a firm believer in actively mentoring young scholars, both at the undergraduate and graduate levels. If you are interested in research opportunities related to his areas of work, please contact him at perezeo@ucla.edu. You can also find out more about his research at https://eoperez.com