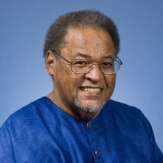 Keller is the author of two monographs: Education, Manpower and Development: The Impact of Educational Policy in Kenya (1980) and Revolutionary Ethiopia: From Empire to People’s Republic (1988). Professor Keller has also written more than 50 articles on African and African American politics, and has co-edited four books: Afro-marxist Regimes: Ideology and Public Policy (with Donald Rothchild, 1987); South Africa in Southern Africa: Domestic Change and International Conflict (with Louis Picard, 1989), and Africa in the New International Order: Rethinking State Sovereignty and Regional Security (with Donald Rothchild, 1996). Africa-US Relations: Strategic Encounters (with Donald Rothchild, 2006). Presently Keller’s main research is on issues of political transitions in Africa, cultural pluralism and nationalism, and conflict and conflict management in Africa as most recently detailed in his book Identity, Citizenship, and Political Conflict in Africa.

Ralph J. Bunche (1904-1971), winner of the Nobel Peace Prize in 1950, was a key U.S. diplomat in the planning and creation of the United Nations in 1945. In 1947, he was invited to join the permanent UN Secretariat as director of the new Trusteeship Department. In this position, Bunche played a key role in setting up the trusteeship system that provided important impetus for the postwar decolonization ending European control of Africa as well as an international framework for the oversight of the process after the Second World War. Trustee for the Human Community is the first volume to examine the totality of Bunche’s unrivaled role in the struggle for African independence both as a key intellectual and an international diplomat and to illuminate it from the broader African American perspective. These commissioned essays examine the full range of Ralph Bunche’s involvement in Africa. The scholars explore sensitive political issues, such as Bunche’s role in the Congo and his views on the struggle in South Africa. Trustee for the Human Community stands as a monument to the profoundly important role of one of the greatest Americans in one of the greatest political movements in the history of the twentieth century.