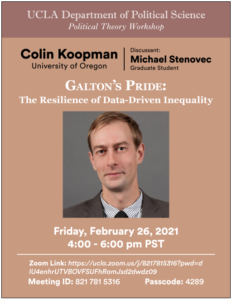 Francis Galton is today remembered as an eminent prince of science if not also as a wild crank who, at the end of the nineteenth century, helped spawn the grandiose political disaster of eugenics.  But moreso than prince or crank, Galton was first and foremost a tinkering technician of measure.  There are numerous domains of science over which Galtonian conceptions of measure retain considerable influence.  Not least among these are efforts in contemporary data science.  Yet as critical data studies scholars have recently shown, new deployments of data science risk a bevy of injustices.  Even where contemporary sciences officially disclaim the inegalitarian moralities of racism that funded Galton’s eugenics, they maintain other of his foci, such as that on the family, and thereby risk, perhaps even invite, social inequalities.