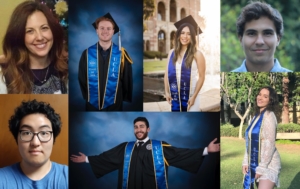 The Department of Political Science celebrates the achievements and hard work of all of our 2020 graduates.  We are so proud of everything they have accomplished and look forward to following their future life paths!  If you would like to get to know some of our 2020 graduates, here are seven students from our department’s Honors Program.

For her honors thesis, Nicole Bergelson, advised by Prof. Giulia Sissa, wrote on “Modern Extremism & Migration: Right-Wing Populism’s Impact on Immigration Policy & Migrants’ Rights in the United States & Italy.”  Ms. Bergelson considered specific policies enacted in the U.S. by the Trump Administration and in Italy by the M5S and League coalition government, and found that when right-wing populists are in power, immigration policy violates domestic and international laws intended to protect migrants’ human rights.  Ms. Bergelson plans to attend law school in Fall 2021, and in the meantime, will be working at a business and real estate law firm in Los Angeles.

In her honors thesis, “Principles of Prosperity: The Effect of Taxation on Economic and Social Well Being,” Carissa Ferguson, advised by Prof. Ron Rogowski, analyzed 48 developed, newly industrialized, and less-developed democratic nations.  Ms. Ferguson looked at whether higher rates of taxation, measured as a percent of GNP, lead to better outcomes of economic and social well-being, including GNP per capita, economic equality, and measures of human development.  Ms. Ferguson plans to continue her research in graduate school and ultimately pursue a career in higher education, with a focus on international and constitutional law.  In the meantime, she plans to enjoy time with her family and celebrate all of the meaningful memories shared with her fellow UCLA graduates.

Philip James Andrew Germain wrote his honors thesis, advised by Prof. Deborah Larson, on “Face-To-Face Diplomacy and the Development of Trust Through Interpersonal Relationships Between State Actors.”  Mr. Germain found that the development of trust between state actors during negotiations is only possible when actors engage in frequent face-to-face meetings to overcome their respective misperceptions. Moreover, domestic opposition in a country crucially determines the strength of trust developed.  Mr. Germain is currently studying for the GRE, with hopes of pursuing both a law and master’s degree from Georgetown University, and aims to work in national security with the State Department or NGOs involved with nuclear non-proliferation and arms control.

The island of New Guinea is rich in tropical rainforests which are now under threat because of timber exporting.  Keeheon Lee, advised by Prof. Michael Ross, noticed that New Guinea is divided into two politically distinct halves: the western half is composed of the provinces of Papua and West Papua, part of Indonesia, and the eastern half is composed of the independent state of Papua New Guinea.  In his honors thesis, “Development, Corruption, and Forest Loss in the New Guinea Island,” Mr. Lee found that the two different polities have several key differences in resource management practices.  Mr. Lee compared the polities to find out how to more sustainably manage natural resources, and thereby alleviate global-level climate change.  Mr. Lee found that the two biggest causes of forest losses in both polities are development-oriented initiatives led by each government and political corruption among national and local-level officials.

Anaís Xitlali López-Ortiz, advised by Prof. Matt Barreto, wrote her honors thesis entitled “Latinos in America or Americans that are Latino?  The Development of Political Partisanship Among Latinos in the US.”  Ms. López shows that among members of the Latino community in the United States, high ethnic identity alone does not have a large impact on political partisanship.  Rather, higher levels of perceived racism in conjunction with a heightened sense of ethnic identity result in a more progressive-leaning ideology.  As the Latino population in the United States grows, it continues to play an increasingly significant role in the American electorate.  Ms. López will continue to do research this election year on young Latino voters, and will be taking the GRE and applying for graduate programs to pursue a PhD in political science.

“Sitting on the Sidelines: Examining the Roots of Latino Party (Dis)Identification” is the title of the honors thesis of Nicolas Studen, advised by Prof. Efrén Pérez.  Using an online experimental study with a national sample of Latinos, Mr. Studen finds that providing participants with additional political information significantly increases the number of self-reported partisans, with the largest growth among Democrats. The increase in partisan identification is consistent with prior work indicating that higher levels of political information allow individuals to better determine which party reflects their interests.  Mr. Studen also hypothesizes that exposing participants to inter-party hostility would suppress expressions of partisanship, but finds mixed support for this.  In the fall, Mr. Studen will be starting as a predoctoral researcher at MIT’s Global Diversity Lab.