Home / Publications / The Return: Russia’s Journey from Gorbachev to Medvedev 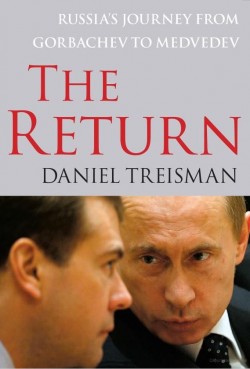 The Return: Russia’s Journey from Gorbachev to Medvedev

In this critically acclaimed book, Professor Daniel Treisman offers a refreshing and exhaustively reported look at the political, economic, and cultural changes in Russia, with an in-depth examination of the modern state and its role in global affairs.

Almost twenty-five years after Mikhail Gorbachev began radically reshaping his country, Russia has changed beyond recognition. In his third book on this subject, Professor Treisman takes stock of the country that has emerged from the debris of Soviet communism and addresses the questions that preoccupy scholars of its history and politics: Why did the Soviet Union disintegrate? Could its collapse have been avoided? Did Yeltsin destroy too much or too little of the Soviet political order? What explains Putin’s unprecedented popularity with the Russian public?