Home / Publications / The Gamble: Choice and Chance in the 2012 Presidential Election 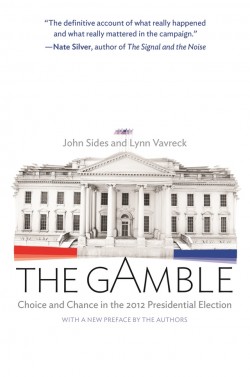 The Gamble: Choice and Chance in the 2012 Presidential Election

Released October 2013: In their award-winning book, Professor Lynn Vavreck and co-author John Sides (Assoc. Prof. at George Washington Univ.) argue that the 2012 presidential race was influenced more by the economy than any other factor — including candidate ground games or missteps, choice of running mates, or a “post-racial” electorate.  In fact, most of what you think you know about the 2012 presidential race is wrong, suggest the authors, who partnered with a market research firm to survey voters and sampled 45,000 voters. They also factored in historical trends, election media coverage, and political ads from 210 media markets.

“The Gamble” was named a “best book” of the year 2013 by several media points, most notably in Slate and National Journal.