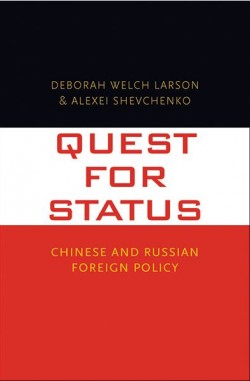 Deborah Welch Larson and Alexei Shevchenko argue that the desire for world status plays a key role in shaping the foreign policies of China and Russia. Applying social identity theory—the idea that individuals derive part of their identity from larger communities—to nations, they contend that China and Russia have used various modes of emulation, competition, and creativity to gain recognition from other countries and thus validate their respective identities. To make this argument, they analyze numerous cases, including Catherine the Great’s attempts to westernize Russia, China’s identity crises in the nineteenth century, and both countries’ responses to the end of the Cold War. The authors employ a multifaceted method of measuring status, factoring in influence and inclusion in multinational organizations, military clout, and cultural sway, among other considerations. Combined with historical precedent, this socio-psychological approach helps explain current trends in Russian and Chinese foreign policy.