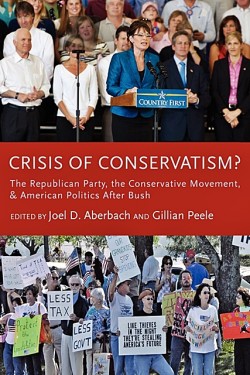 Crisis of Conservatism? The Republican Party, the Conservative Movement, and American Politics after Bush

In Crisis of Conservatism? co-editors Joel Aberbach and Gilian Peele assemble a wide array of authors and scholars studying the “American Right” in order to gain perspective on the internal stresses of a movement that many trace from the 1980 emergence of President Ronald Reagan, to a re-assertion of neoconservatism within the presidency of George W. Bush, through the rise of the “Tea Party,” and finally to the Republican Party’s loss of the White House in 2008. Chapter authors look at a nearly 30-year tug-of-war between the various idealistic and pragmatic shades of conservatism, its major players at several levels of government –including the courts, and forces from outside the government that affect it — from neocons and Libertarian think-tanks to the religious right. In the end, editors and authors also review the Right’s fundamental strengths and resilience, even as it is being led by a minority opposition party.