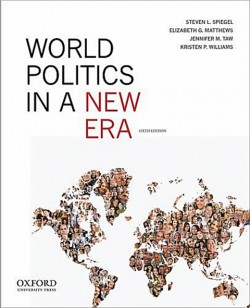 Now in its sixth edition, this highly regarded textbook on “new” era world politics takes up in the late 17th century and brings the student to the present. “World Politics in a New Era” engages more than three centuries of world history with the geopolitical world as those who study modern international relations know it. The authors weave traditional themes of economics and culture – and globalization and fragmentation – with an understanding of all the political “isms” developed since the modern age began.