Home / Publications / The Resurgence of the West: How a Transatlantic Union Can Prevent War and... 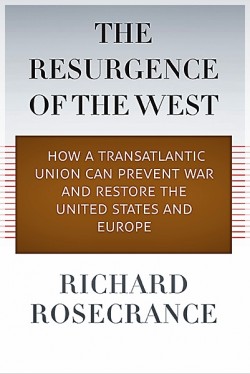 The Resurgence of the West: How a Transatlantic Union Can Prevent War and Restore the United States and Europe

Richard Rosecrance’s latest book calls for the creation of a United States/European Union economic alliance that, he predicts, would incentivize and further the creation of a worldwide international order. Standing apart from those who advise America to slow its perceived economic decline on the heels of two centuries of increasing fortunes by reverting to isolationism, the author sees that kind of move as an abdication of leadership by the world’s remaining superpower. A transatlantic economic union would, instead, unblock arteries of trade and investment, rejuvenate the West, and enable Western countries to deal with East Asian challenges from a position of unity and economic strength. Rosecrance believes the success of that uniting of efforts would then also attract the East into the larger fold of nations.